FREE SHIPPING WITHIN AUSTRALIA ON ORDERS BETWEEN $50.00 - $700.00. NOW SHIPPING INTERNATIONALLY TO MOST COUNTRIES

This will fit the 22 model, however you won't be able to connect the oil temp plug as it is a different connector!!

Unfortunately Opmid will not be developing an adapter plug for these to fit the 22 model (JB03) due to many errors with the display when trying replace the coupler or modify the wiring.  Opmid are currently working on a new model to fit the JB03, we have placed a pre-order, however the release date is still unknown.

9-segment numbers are used for the speedometer to improve visibility compared to the genuine 7-segment.
The LED indicator at the bottom has a shift indicator and a speed / oil temperature warning light.

The large numbers and thick bars allow you to instantly see changes in the number of revolutions. The display range can be selected from two types, [~ 10000 rpm], which is just right for normal motorcycles, and [~ 13000 rpm] for modified motorcycles.

Added a gear position at the top center.  The reflection speed has been increased to about 0.1 seconds while using a calculation formula that is calculated from the speed / ignition signal ratio.  With the Monkey 125, you can enable an auxiliary function to prevent false display of gears during coasting with the clutch disengaged.

Equipped with an ABC 3-row display frame on the right side of the display. Equipped with an odd trip oil change rangefinder in row A, a clock / running time / hour meter in row B, and an engine thermometer / voltmeter in row C. You can easily switch between each display with the button ABC on the left.

The genuine main coupler and meter stay can be attached as they are. The sub code for inputting additional functions is also a coupler-on specification.

The inverted black LCD, which tends to be difficult to see, is also improved in visibility with an LCD with a high contrast ratio and a high-brightness backlight (adjustable brightness).

It is about 20mm thinner than the genuine product, and the appearance from the side is also customized.

The body uses ASA resin, which has the same high weather resistance as the genuine product.

Compatible with and without ABS.

If you are buying this for a CT125 you will need a bracket for an additional $45.00 Click Here for more details

* 1) Please note the following for motorcycles with ABS. Since the correction function for changing the sprocket is a correction inside the meter, it is not a countermeasure function for errors that are issued from the ABS device side depending on the number of replacements. If you replace the sprocket on a motorcycle with ABS, you will need a retrofit device ( doctor speed, etc.) to correct the signal at the speed sensor

* 2) Displays the measured value of the genuine temperature sensor. The displayed value is the same as the output value to the OBD2 tool.
A genuine temperature sensor is attached to the passage where the oil that has become hot in the cylinder head returns to the crankcase. Since it is measured at the hottest point, it always means a value higher than the average temperature of the whole oil and the drain bolt temperature at the bottom.
In addition, since the discharge amount of the oil pump increases or decreases according to the engine speed, it refers to a value close to the temperature of the hot oil during running when the circulation amount increases, but the running wind does not hit and the oil circulates. When the vehicle is stopped (during idling), the amount of heat generated> the cooling power, and the value of the genuine temperature sensor near the combustion part starts to rise immediately.
In addition, CT125 has an average engine temperature of about 15 ° C higher than Monkey 125 due to the fact that the total amount of oil is about 20% less and the frictional heat of the centrifugal clutch.
Reference value) Temperature around 20 ℃ ・ Normal engine
Monkey 125:
110-115 ℃ while driving, 120-125 ℃ while stopped CT125: 125-130 ℃ while driving, 135-140 ℃ while stopped
“Stopped” for several minutes It is the value of waiting for the signal of, and it rises as it stops for a long time.
As an option other than using a genuine temperature sensor, the multimeter is equipped with a reading circuit that can also be used with a retrofit temperature sensor. A drain bolt type temperature sensor common to Monkey 125 and CT125 will be released around the spring of 2021. 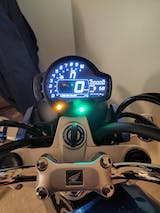 K
Keith SUTTON
Great product and worth the price!

I bought this for the gear selector, tachometer, oil temp, voltage meter and other features plus a much clearer display for my CT125. Delivery by Australia Post and arrived in 3 business days. It took me about 4 hours to install but the next one would probably be a lot less and there was a couple of good u-tubes to watch for the process. Getting the plastics off and on the CT125 took most of the install time. Overall a good experience. Cheers Keith